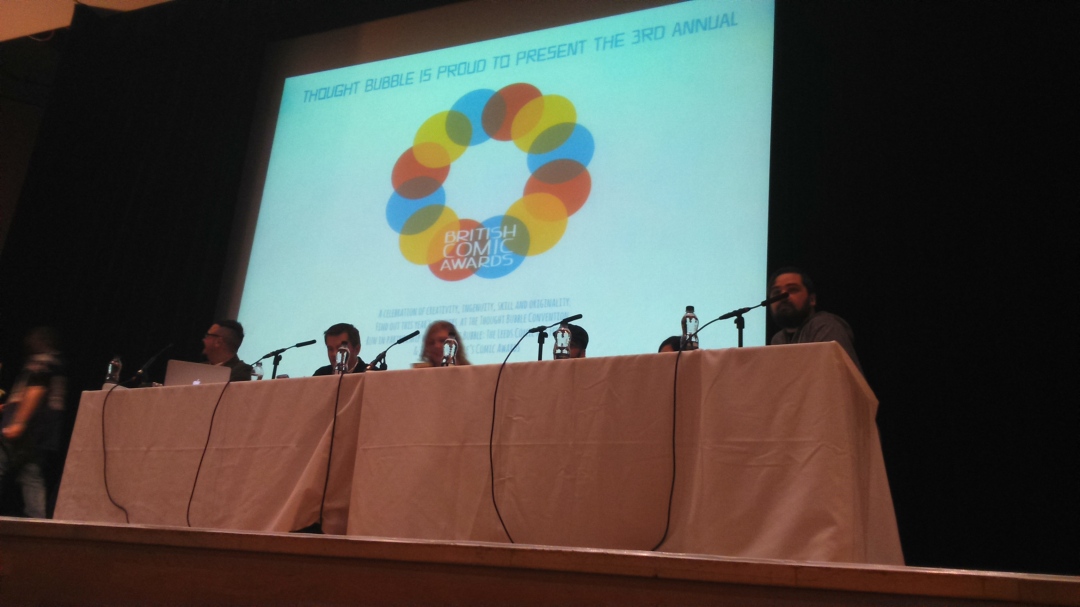 Hello my fellow bookworms and Page Turners! It’s time to for another panel overview this time we are looking at the third panel i attended at the comic extravaganza that was the Thought Bubble 2015! .. so what is on the post today .. well those of you who read the title, would know that this post is all about!..

Lets start off by equating you with our panellists:

Margueritte Bennet  is a former student and protégé of the great Scott Snyder (creator of the comic series ” wytches”) . Margueritte is currently a writer and artist for DC comics and is most well known for her love of all things horror and her work on DC comics Bombshells.

Ray Fawkes is a Toronto-based fine artist and writer of comics, graphic novels, prose fiction, and games. Ray’s work ranges in styles from introspective, dreamscape narrative to bombastic slapstick. He is an Eisner, Harvey, and three-time Shuster Award nominee, and a YALSA award winner for “Possessions Book One: Unclean Getaway”

Emi Lenox, who was dubbed “the cutest person in comics” by Margueritte Bennet  during this panel. is a comic artist and illustrator. she made a name for herself with her first diary style comic, EmiTown, which has been collected by Image into 2 trade paperbacks. She has done work for Image Comics, DC Comics, DC Vertigo, Nickelodeon, and Oni Press.

Charles Soule is a Brooklyn, New York-based New York Times best-selling comic book writer, and attorney, known for his work on books such as 27 published by Image Comics, Letter 44 from Oni Press, Death of Wolverine, and Superman/Wonder Woman.

Now we are more equated with the Panel, lets crack on with the main event! the writers round-table:

“When you write, who do you write for?” (ie family, yourself the readers or that nerdy kid that got hung by his pants on a hook in the changing room during P.E)

Charles : “myself, I know it sounds bad and a little egotistical.. well very egotistical but I definitely write for myself”

Margueritte: “this is a difficult question, I would say it depends what I am working on at the time, there are times in comics where you have to do a lot of what other people want before you have enough “clout” in order to go of and do your own thing, so in that instance I am writing for myself, however I also write for my family, and of course the readers themselves”

Ray : “I write for the readers and myself, but in honesty I only show a small portion of my writing to the readers, I write a lot of stuff, some of which will never see the light of day.  When I show something to someone (i.e a reader) I am hoping that it makes a connection with them, and I feel the writing for myself is my connection, and its not something I ever really share.”

Emi : ” um… I would say its difficult form me as I am known for something that can be seen as quite personal (diary comic), so I am really writing for myself in that i’m trying to move away from that and write things I want to write, and other people to like rather then.. “today I had a sandwich” “

Curtis: ” I try to write things that havn’t been done yet, wow that sounds big headed, but its true  that’s what I try to do and I do that because I really write for myself and to push my own boundaries as a writer”

Do you think that Social Media has effected the way that Comics are made, and the themes they follow?

Margueritte: ” for me its had a massive effect on the way I write and the comics I have done thus far, there was a point when working on Bombshell’s that most of the artists I left, and I found myself going through the fan art pictures of “Mad Max” that  have Favorited on Twitter, because I love Furiosa, I mean I have a heart guys.. anyway that’s how I found all these amazing artists who ended up working with me on the comic”

Ray : “Social media is definitely a brilliant tool, but sometimes.. when the pressure of work gets a little to much, I find myself looking at twitter and thinking.. with just one tweet… I could end my entire career.. all I need to do it touch a button and that it, its pretty tempting sometimes!”

Margueritte: ” yeah, people should be a little nicer to everyone on there sometimes”

Emi: “yea, but don’t listen to them,  don’t let the haters run your life, just write and draw and do what’s in your heart” *mimes drops mic* “I cant drop these mic’s they look expensive”

Curtis: “Its a brilliant skill to help interact with fans, without my fandom I doubt Rat Queens would have got as big as it has, no amount of marketing can do that, as much as I love and hate Tumblr, the fan art, cos players and all other fan-based content around Rat Queens is the reason its so big, they got the word out, so yea social media is a very powerful tool”

Who would you consider to be your Mentor?

Ray : “Alan Moore” is an English writer primarily known for his work in comic books including Watchmen, V for Vendetta, and From Hell.

Margueritte: ” Scott Snyder” – her old professor, Scott Snyder is an American writer. He is known for his 2006 short story collection Voodoo Heart, and his comic book writing, including American Vampire, Detective Comics, Batman, Batman: Gates of Gotham and Wytches.

Curtis : “Warren Ellis” is an English author of comics, novels, and television, who is well known for sociocultural commentary, both through his online presence and through his writing, which covers transhumanist themes (most notably nanotechnology, cryonics, mind transfer, and human enhancement).

The panel also discussed the “death” of the online writer forums that used to exist when they where starting out, they feel that this is a loss to those who are starting out now  for example communities like “Miller World” where ran by some of the “Top” writers of the time, and they would run workshops, and give hints and writers would gather to discuss idea’s and tips, there is a similar community now on twitter, however it isn’t the same.

Do you feel that the Comic industry is going through a revolution at the moment?

The panellists discussed how a new influx of “new blood” in the comic book industry as well as in its readers has caused a shift in current themes, they all strongly feel that comic books is a medium that has a lot of untapped potential. however with this new shift it has opened avenues that a few years ago where unexplored such as  a new influx of Romance and Scifi comics. not to mention a more open market to an indie audience in the way of off the wall horrors, thrillers, and diary comics, the industry as a whole has become a lot more accessible to the masses in recent years. The key to success in the industry was revealed by Ray.

“when you are writing always try to seem more clever then you actually are!”

That wraps up my overview of the Writers round-table, I hope you all enjoyed my post, I would love to hear what you think or if you have anything to add or discuss!