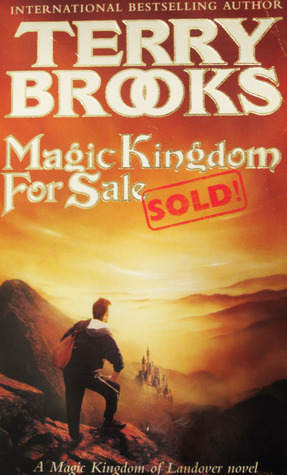 I first read this book when I was round about 11, it was one of the very first Fantasy books I had read as a child on my own. and I distinctly remember having to use a dictionary for some of the words, which is rather embarrassing when I think about it.

I remember, I really liked the story, and in particular a certain bumbling court wizard.. but we will get to him later. Above all else I remember wishing when I “grew up” that I could one day pick up some “arty farty” magazine and find some amazing magical kingdom for sale, and of course Like Ben Holiday (the main protagonist) buy it, to be honest, I would still buy it even now.

Clearly, I couldn’t review this from memory, especially as I can’t remember what I had to eat 2 days ago. So I went back and revisited my childhood over the last 2 days. Needless to say my trip down memory lane was a very pleasant one, so without any further ado let’s get on with the Review.

Magic Kingdom For Sale/Sold!, was my first introduction to Terry Brooks’ work, and I have to say, I hit the ground running, this novel, is the start of an epic series of books which follow the exploits of one Ben Holiday, a widowed disenchanted Chicago lawyer, who is trying to pick up the pieces of his life and somehow find a new purpose. A Purpose which he finds in one of his deceased wife’s “super posh” Christmas catalogue.. what is in there I here you cry?, well a magic kingdom which is being sold for a cool $1 Million. At first he thinks he has finally flipped, as he considers the purchase, but in the end he throws caution to the wind and jumps at the chance, even though he only partially believes it could be real.

but of course, it is very real, it’s as real as the nose on both yours and my face, but it’s not exactly what he was expecting.. and not exactly as the advertised, initially portrays. Because everything is running down and withering, because the magic is running out. His magic kingdom is dying and needs a true king to save it. This leads to Ben’s first issue, there has been so many false kings as of late that the worlds inhabitants, have not faith in him as anew king at all. Apart from a handful of unusual sorts who remain loyal to the crown of course, these four loyal companions are a bumbling, Court Wizard called Questor Thews who’s use of magic is somewhat comical as he has no grasp of it.. well at all really, asking him to cast a spell at the beginning anyway is a real Russian roulette. That and the fact he is cheeky, sarcastic and a little underhand and yet strangely loyal.. confusing I know, is why he is still my favourite character. Abernathy, the sarcastic court scribe, who once Human, but is now a talking dog, thanks to one of Questors spells gone wrong and, last but not least Bunion & Parsnip who are two kobolds who love to give toothy grins, and carry out the day-to-day chores. They act as groundskeeper and cook respective. these four loyal companions, all live in the living castle Sterling Silver, a living entity that grows stronger and more shiny with the presence of a king residing within it.

So this bizarre group of unlikely companions, along with Ben Holiday, have a meeting to discuss the facts of this dying land, in this meeting Ben is told he needs to do something about the Land, its people, and the lack of magic. The product of this meeting is that they all go out into the land on a quest, in order try to win the hearts of the people, and get them to rally together by pledging their allegiance to the king, just as they had done to the old king before him.. but it won’t be easy. The Lords of the Greensward, meet him with a steely reception, and state that before they pledge to him, they want him to get rid of Strabo (a Dragon, that is terrorizing the villages and Hamlets, and devouring cattle and sheep alike. They then go to see the River Master, but before he will pledge to him, he wants Ben to stop the humans from polluting the river system. During his visit to the River Master we also meet Willow a wood Nyph/ Fae who’s beauty is almost beyond compare, she seems to be slowly mend Bens heart throughout the novel and becomes main love interest for the character.
To get rid of Strabo, he’ll have to convince the untrustworthy powerful witch Nightshade to help him, and she has never liked any King, and has never pledged her loyalty to anyone. Then if all this kafuffle and juggling wasn’t enough!, to top it all off, the Iron Mark (essentially the devil incarnate, including his horde of horrific minions) has challenged him to a duel to the death, and the only way he could possibly survive that is through the help of the Paladin, the King’s protector and champion of old. Just one problem: no one has seen the Paladin in twenty years.
I have to admit, even though I do like this story, for all its nostalgic properties, that I feel when I read it, as well as the fact it is a very good story. Brooks’ writing can occasionally be a little repetitive, he likes the word admonished quite a bit and Ben was forever wanting to throttle people and although the characters were humorous, sarcastic, loveable but here is the problem, they were predictable at times.
The world itself is quite imaginative in a clichéd way – it’s your typical ‘fantasy’ land complete with dragons, witches, wizards and other fairy people as it said in the sales pitch. Saying that Landover isn’t written for children, it’s for adults this is clearly reflected in both the writing style and the materials that touch upon politics, economics and law which as much as I can say I understood as a child.. I don’t think I did, that being said, it’s still very appropriate for young adult readers. So it gets a thumbs up from me, and i feel its a great series to get you started into the fantasy genre. If you are interested to have a look into the series the full list of books in this series are

#1 Magic Kingdom For Sale/Sold!
#2 The Black Unicorn
#3 Wizard at Large
#4 The Tangle Box
#5 Witches Brew
#6 A Princess of Landover

Until next time read more books!...

One thought on “B|t|B: Book Review – Magic Kingdom For Sale/Sold! by Terry Brooks”