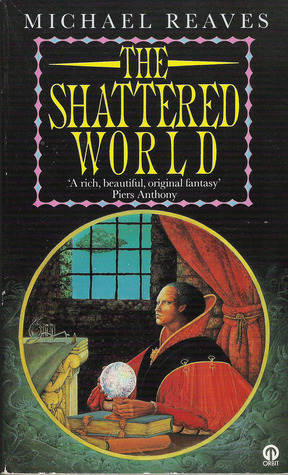 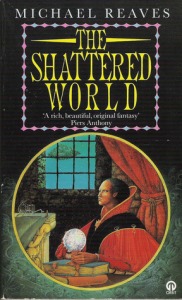 Title : The Shattered World
Author: Michael Reaves
No of Pages:413
Published:1984 by Futura

Hello again my fellow bookworms and page turners, this is a book that I read when I was very young. Nostalgia may be clouding my judgement ever so slightly.

The Shattered World is the first novel in a duology, followed by The Burning Realm. the novels are written in tradition of Peirs Anthony and Alan Dean Foster.

About a millennium ago, a Necromancer, brought about a great cataclysm. The world was broken; now people live on the fragments of what remains of the planet in the abyss the only thing that’s holding the world together are the great spells of ancient sorcerers, but even those spells grow weak over time! Transportation between these “fragments” are in the shape of flying ships made of the skin & bone of dragons.

The book follows the interweaving stories of a thief, a couple of wizards, and various others as events are set in motion that will take them on perilous journeys to the far reaches of the world with far-reaching consequences.

The plot is interesting and changes quickly, usually with a new plot point to each new fragment they visit, but still with a over arching goal for our protagonists to achieve.

The Characters, although I must admit are very common tropes. For example we have the “super thief” with a troubled past, a mighty magician filled with self-doubt, a flirty, power-hungry wizardess, and a wizard in training with unlimited power that must be controlled. But even though these are all tropes that we have read time and time again  Reaves continues to keep them interesting and really breathes life into his characters and their decisions through his writing that make you invest in those characters futures.

The one thing I would say is a down point to this book, is the language used, I would say it is just about on par with The Silmarillion, it was/is way, way above my reading level, even now. (not that I am an amazing reader or anything) So I suggest maybe having a dictionary to hand, just in case!. The only reason this is a down point for myself is I can’t read a word and not know what it means, i need to stop and look it up which at times meant there was a lot of breaks in my immersion.

However on the flip side its compelling, interesting, funny and slightly gritty in places, and if you have a willingness to learn greatly educating in regards to the English language, and has a few medical terms thrown in there too.

The world building is fantastic, with each fragment being its own little eco-system and in some cases its own series of rules which doesn’t allow the story to become stagnant. Overall this was a good read, and definitely one for die hard fantasy fans!.