B|t|B: Books that should be made into a Film or TV Series #1

I am completely aghast as to why this hasn’t been made yet, with its dark hustle come ocean’s eleven-esc story set within 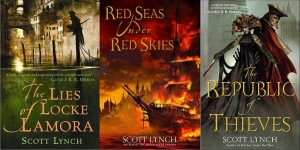 an Italian flavoured fantasy Venice. Its sure to be a hit, a world of deceit, corruption and manipulation, this is the playground of Locke Lamora otherwise known as the Thorn of Camorr.

Born with a quick wit and a gift for thieving, Locke Lamora dodges both death and slavery, only to fall into the hands of an eyeless priest known as Chains, neither blind nor a priest. A con artist of extraordinary talent, Chains passes his skills on to his carefully selected family of orphans “Gentlemen Bastards.

This young group of miscreants then grow to be the best con artists in all of Camorr, posing as nobles and merchants, pulling con after con, squeezing money from the wealthy gentry, gaining influence, and accounts for their various alias’s that they slip into like a pair of warm gloves, all while avoiding getting their throats slit. But all things must come to an end, Locke is blackmailed by the grey king in order to slowly destroy the Capa Barsavi’s (the head of crime) business, as well as put an end to his most trusted men, he using Locke as a pawn in his plot to take control of Camorr’s underworld, his family and way of life held as collateral, but Locke vows to beat the magically protected Gray King at his own brutal game — or die trying.

Given the resounding success of Game Of Thrones, I expect to see more dark fantasy on the box soon enough, as I feel way past time for more  decent fantasy on television or feature film. I believe all the ingredients for a decent production are there within the literature. As for TV or Film.. I am unsure, I would say that a movie adaptation would be the safer bet as it would be one block lump of storytelling revolving around Locke Lamora, however you will need to get a decent director, as the challenge would be to reduce the dense plot to movie-length without losing the charm and wit of the book. Where as a TV series would be a lot more difficult to produce, and cut down into equal segments, I would personally like it to be a TV series, as then there will be plenty of time to make sure as much of the original literature is used as possible, and it will give the audience time to equate themselves with the world and the supporting characters. And with a further 6 planned and 2 already released novels in the series, “The Gentleman B@stards” or “Lies of Locke Lamora” could prove to be quite the lucrative franchise.

Its clear that it has a large fan base and a fan has already made a title sequence for this long awaited, and well loved series.

Until next time, read more books…