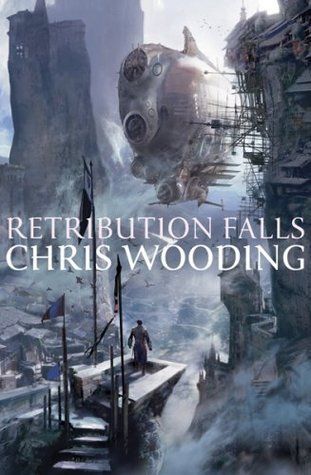 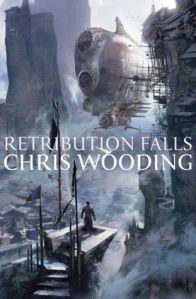 Retribution falls is the first instalment of the Ketty Jay Series, which is one of my favourite series of novels to date, The Plot revolves around a small and highly dysfunctional band of layabouts. An inveterate womaniser and rogue, an alcoholic doctor, 2 ace pilots, one a daredevil, the other once a brave hero and now a snivelling coward, a Handsome male Daemonist, and a Pretty, cat repelling female navi, and a Stoic Mechanic. we first meet this mockly bunch as they are dealing with another dire situation which just another link in the chain of their recent bad luck.

That is until Captain Frey is approached by a seemingly easy proposition, just a small act of piracy, but with a big pay out. The crew mouth their disapproval only to be sedated by the smooth talking Captain and promise of riches and bragging rights. During this “simple job” everything goes wrong, the ship they were trying to rob inexplicably explodes! It seems their captains greed has really landed them in hot water this time. not only are they wanted pirates, they find themselves caught up in a much larger international conspiracy. With everyone from bounty hunters, the law and the queen of pirates herself, seemingly wanting to kill them. They have no choice but to stay on the run, trying to stay one step ahead whilst attempting to discover what larger scheme is taking place, and hopefully clear their names or at least get rich.

Despite the rapid plot. Wooding has still managed to squeeze in plenty of character development allowing us to watch them grow from a haphazardly thrown together group of people to a crew who form a strong bond of loyalty and are all indispensable to their operations. The crew often find themselves in a dire situation, but due to the style of writing the author uses he makes these scenes both intense and hilarious, in fact his use of humour is just brilliant throughout. His use of sarcasm and Jovial description, always had my thumbing for the next quip.

“Ladies, gentlemen, we’re out of here! Your boss is upstairs, and only mildly wounded. Go help him if you have the inclination. You’ll also notice the house is on fire. Make of that what you like.”
― Chris Wooding, Retribution Falls

I would definitely recommend this book to anyone who is a fan of Firefly, steam punk or Scott Lynch’s, Lies of Locke Lamora series. It’s an easy to read steam punk-esc adventure, with unique characters, heart bounding action, and some mystery, love and drama threw in for good measure, its truly a book that is firing all cylinders for me. I struggled to put this book down, and the best thing is if you read this now the entire series has already been completed! which means you can crack on with book 2 “The Black Lung Captain” and follow the exploits of the crew until the end!