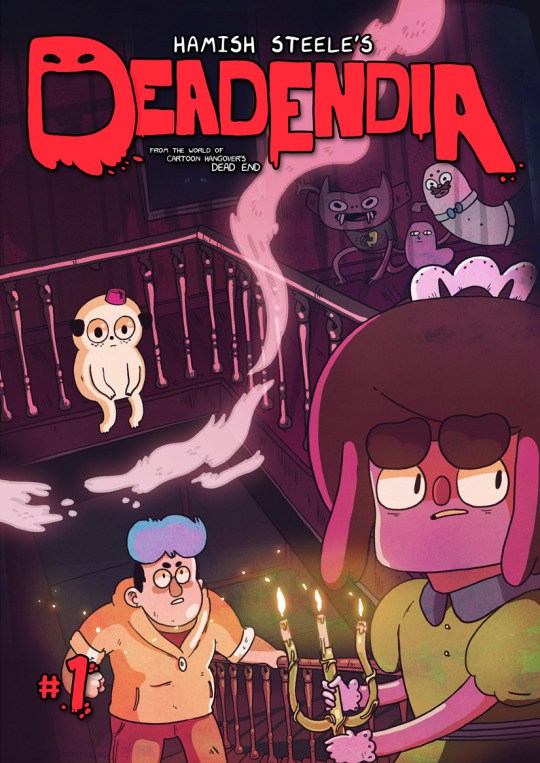 Way way way back in November I picked up an issue of DeadEndia and met the charismatic Hamish Steele in person at Thought Bubble Leeds shortly after picking up this novel my stomach got the rumblies so I had a sarnie and read the issue as I ate, needless to say I was hooked there and then. I immediately went back and bought the remaining 3 issues he had available for purchase at that time.

DeadEndia is very reminiscent of one of my favourite western animated television shows Gravity Falls. In that DeadEndia is crammed full of outrageous humor, bizarre scenarios, and a heck of a lot of heart.

The story follows three colourful characters Barney, Norma, and Pugsley who work in an amusement parks haunted house, all the while trying to hide the fact that it is actually housing a whole plethora of ghouls and beasties, each of which as amusing as the next. the crazy antics of the characters leads to many amusing situations, not to mention all of the pesky phantasma who feel the need to wander the park, and make life even more difficult for our protagonists.

It is clear from his work that Hamish likes to break down barriers, his characters are diverse individuals which is a nice change of pace in terms of diversity and representation. This can be shown in his choice of protagonists alone as the main character Barney is trans-gendered and Norma suffers from a mental illness. The diversity doesn’t stop there as many of the characters represent understated and often over looked communities. This often leads to some real heart jerking moments as many, including myself can often relate to the characters dilemma, which leads to a really strong sense of emotion from the reader.

DeadEndia, Where there are more highs, lows, loop-de-loops and sweet sweet candy then any amusement park.

The artwork is very colourful and is a similar style to many american animated TV shows to go back to my previous example of gravity falls and not of course forgetting Steven Universe, which also like Hamish’s work represents a wide variety of characters from all walks of life.

While I have to admit the first issue is purely set up for both the scene and the characters, but to be fair what more can you expect from a pilot issue. despite this i was hooked on the premise and characters still gripped me.

If you are looking for a cute comic, which is colourful, super funny, and diverse, then look no further than DeadEndia.

Until Next time, Read More Books