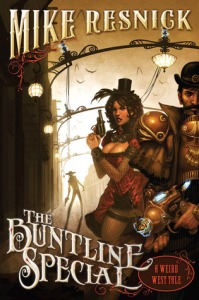 Hello my fellow bookworms and page turners and welcome back to Steampunk week! in this post I will be giving a short review of Mike Resnick’s debut book in the Weird West Tales series, The Bluntline Special.

So, where do I start? sometimes when you read reviews of books from what I like to call “a trusted reviewer” you can avoid some of the more terrible books out there, and other times you read them and wonder.. what the hell was they actually reviewing? because it sure as hell wasn’t the book I just read? well this book is definitely within the latter territory, I have seen several reviews rebuking this novels awesomeness, and I have to say boo to those nay sayers because it was a brilliant Steampunk novel.

This story to me is a true incarnation of what I believe the steampunk genre is, it’s true to its roots and despite obvious twists and turns in timelines and story, pretty historically accurate, in particularly where the characters where concerned.  From Native Indian medicine man, to Federal marshals, not to mention The Earps and Doc Holliday, this book well and truly oozes with western charm, not to mention meticulously maintained facial hair. It also has a strong sci-fi element to it with its Electric Cars, Cyborgs and hand held Gatling guns (believe me you don’t want to be standing in front of one of those).

well that’s enough about the stories elements, what is it actually about I hear you cry? well..get sitting comfortably and I will tell you!

Wyatt Earp has been assigned a task to protect two high profile gentlemen, Thomas Edison and Ned Buntline from a group of Native American Indians, in particular Geromino and his enemy, Hook Nose. A task he cant do alone, so he calls upon his friend Doc Holliday to assist him in this task.

The two are being targeted by the Indians as they fear they are too close to figuring out the secrets to the Indian magic that thus far have kept the “White eyes” (white folk) on the eastern side of the Mississippi. In the meantime, finding out that the infamous gunslinger, Holliday, is in Tombstone to protect Edison, Hook Nose revives a dead man, Johnny Ringo, to kill Edison.

Ringo has no problem with killing Edison, but what he really wants to do is fight Holliday, and prove which of them is the actual best in the west. First, though, the zombie gun-slinger wants to talk to Holliday, because they might be the only college-educated men west of the Mississippi.
In short this is a rip roaring gun slinging adventure, fraught with moustaches and the supernatural, a fun read indeed! so get your shoes on, or your clicking fingers out, and pick up a copy to read for yourself!

Until next time, read more books