Hello my fellow bookworms and page turners,  in today’s post I will be talking about last night’s Head in a Book event, which was an evening with Brian case, the event as usual was held within Hull Central library.

Brian Case, writer, journalist, interviewer and Jazz lover. Is also the Anglo-Irish son of a Deptford cop, Brian Case got hooked by Charlie Parker at the age of 12 and never looked back. From his indoctrination to jazz at 12 Brian was hooked, Jazz became a big part of his life, and eventually he became the ultimate source of hipster nods for everything from books to films to records.

And now Brian has revisited Hull to regale us with stories from his career and too of course talk about his most recent work “On the Snap”. Brian has a long History with Hull from being a Student at the University here in 1958, where he met many a local legend one of which was Philip Larkin, the renowned poet of the area. To my delight he admitted he was not a fan of the man’s personality and described him as “a bicycle seat sniffer” I personally have always thought Larkin to be drastically over rated,  especially in comparison to other wordsmiths in the area at the time, It was good to know that I am not the only person who thinks this.

He also told us stories of his friends in Hull, one story he told stick particularly in my mind.  It was on “the hardest guy he ever met” he was a Dock worker, big guy, nothing really scared him, except for the one time, when he felt real fear. he had been commissioned to go down in a diving suit to survey the masonry of the dock for damage during his dive his life line and air pipe became obstructed by a anchor chain, unable to move and facing uncertain death he said he broke down and cried knee deep in the mud, and as his air began to run low the tide moved the chain from his life line so he was able to summon a rescue. After that he never felt fear again. As well as these stories of his friends he told of his experiences while being in Hull, and how it has changed so much in his eyes over the years from a Fishing Port to the Multi-cultural city it has become.

Brian has been a writer for NME and most of the other Magazines about the Music scene that are worth there salt. He is also a critically-acclaimed author of his 1968 novel The Users, but he never wrote another book again. Over the years Brian has interviewed many a person throughout his career from musicians to actors his latest work On the Snap is a collection of these interviews / conversations. admittedly not all, this is small snipped of his most memorable encounters – from Chet Baker and The Sex Pistols to Jack Nicholson and Al Pacino. All delivered in the unique vernacular of one of the great contemporary journalists, it’s a snapshot of an intoxicating and disappearing world. 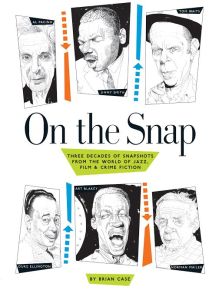 From “On the Snap” Brian read an extract about his Al Pacino interview which turned into quite the fiasco where  he ended up going to the Interview, his pockets laden with volatile 1940’s style live ammo. This wasn’t even the most surreal story he told us from his new book.  and what was this story? well only embarking on a most peculiar Q&A  session, through a medium no less, that’s right he was part of a joint mission to communicate with the late Buddy Holly. A very funny & surreal account indeed. Now I am afraid i will not give you any more details of what transpired in these two instances as it would most definitely spoil the story (second hand accounts are never as good as the first), so my suggestion is that you read it for yourself! you can pick up the book on Amazon HERE what are you still here for?.. get reading!