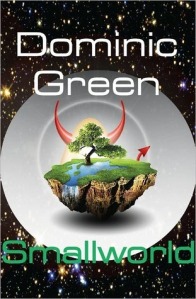 Smallworld, is a bit of an oddity really, in its entirety there is no doubt that it is a novel. However each individual chapter is discrete, and is more like reading a book of short stories than a novel. Being a fan of short stories, I’m fine with it however I can see the writing style being somewhat jarring for those unused to short fiction.

The story takes place on Mount Ararat, a world the size of an asteroid yet having Earth-standard gravity, plays host to an eccentric farming community protected by the Devil, a mechanical killing machine. Now you may think why does a farming community need to be protected well.. I can’t really answer that, but I can tell you that they are under threat more than often from anything from escapees from penal colonies to Manufactured Humans called “The Made” which are being hunted by the state.

The book as a whole was very funny, and read very similar to that of hitchhikers guide to the galaxy, especially in the first part of the book. The hardest thing for me to get my head around were the complicated and ridiculous names for each character, especially that of the main protagonist family. That’s right instead of having just one we have an entire family of *takes a breathe*Protagonists called Reborn-in-Jesus. Yes, that’s their last name, so you can just imagine what their first names were like!

Although I personally liked it, this isn’t something I would recommend to everyone, especially those who have somewhat religious tendencies. But the book does have a lot going for it, other than the robots, lunatics, and “backward” religious yokels trying to make it on a mudhole planet who are not as backwards as they appear. to a old school Sci-fi/fantasy lover, its gold, to anyone else.. I am not so sure.

Until next time, read more books!..