Hello my fellow bookworms and page turners, today’s post is an interview with Matt Stephens co-founder of Fingerpress and founder of Inkflash the new and innovative VR 3D Book Marketing and Online Bookstore.

Inkflash is a huge 3D bookstore that runs within your web browser, this includes, Chrome, IE and Firefox (I checked).  Inkflash takes the shape of a labyrinth of themed rooms, each room is based on a particular book, genre, author or series.

It’s still pretty new, although many authors are already signing up to have their books turned into what are effectively interactive book trailers, which visitors can watch and explore in their own homes through their browser. It’s a new way for booklovers, readers and writers to discover books in a way that brings the books to life; for authors, it’s a new way to market their books, and an opportunity to make them really stand out from the crowd. At the moment there really is nothing quite like it out there. BUT is this the future of publishing? and book purchasing, lets see what Matt has to say on the matter!

Can you tell us a little about yourself and how Inkflash came about?

My background is primarily in software development, though I also write the occasional book on software design; and a few years ago I set up an indie publisher called Fingerpress (http://www.fingerpress.co.uk/), specialising in historical novels. So it seemed a natural progression to combine both backgrounds into one project.

Considering the failure of previous 3D recreations of this type, why do you feel that Inkflash is different, and how do you plan on enticing people back to you rather than a commonplace internet retailer?

You’ve hit the nail on the head – there’ve been several attempts to create a 3D bookstore, none of them successful. It’s those failures that got me thinking about why people would even want to navigate a “realistic” bookstore environment hidden behind their computer screen, clicking and fumbling away while faced with a limited selection of books. The answer is, no-one would want to voluntarily do that, and why would they??

So with Inkflash, the whole concept really is different. Those earlier attempts, in trying to replicate a “real” bookstore, ended up with the worst of both worlds: limited selection of books, cumbersome interface, sterile environment, zero personality, and so on. And in particular, there were no attempts to engage authors directly. Instead, Inkflash is very much about bringing authors on board, and creating 3D “rooms” that are like interactive book trailers – like stepping inside a painting and walking around, exploring the world inside. Once they’ve exhausted the potential of one room – and hopefully bought the book – a visitor can step through a doorway to a whole different room that showcases another book (or set of books). So you end up with a sprawling labyrinth of interactive, themed 3D rooms that bring all these different books to life.

What are the main challenges yourself and your team have faced throughout this project?

Knowing when to stop! Seriously — with a project of this scale, with so many different moving parts, it would have been scarily easy to just keep on adding features, never actually releasing the website. Many IT projects fall into this trap, and end up churning away for years without ever releasing any actual working software. And with something like Inkflash that we’re so passionate about, it would have been all too easy. So at some point we had to draw the line and say “Right, once this crop of features is ready, let’s launch the site.” What it does mean is that we have a whole new set of features waiting to be completed and launched over the next few months, which is pretty exciting in itself.

Could you briefly talk us through the elements available through Inkflash, which would aid authors in creating a VR marketing platform, such as the Virtual Book Tour application.

When an author signs up, they’ll have access to a powerful and easy-to-use Room Builder, which lets them customise their

3D room in all sorts of ways – e.g. adjust the fog level and lighting, add walls, drag-and-drop shelves and books into the room. They can choose a room template that most closely resembles their book (could be based around a ship, submarine, desert island, ancient city, alien planet, etc) then tailor away to their heart’s content. Or if they prefer, we can design the room for them, so they can totally choose the level of involvement in the room’s creation. But I can’t stress enough how easy (and fun!) the Room Builder is to use.

(By the way, we call these “rooms” but they can really be anything or anywhere, including outdoors environments). 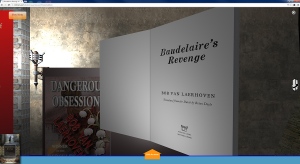 We just recently added 3D book previews – so an author can import their book PDF. Visitors can then “pick up” the book within the room, and click to seamlessly open it up and flip through the pages, within the 3D environment. If the room has flickering candlelight, it really is like reading a book by candlelight – so the reader becomes even more immersed in the book’s setting.

In terms of how this all helps authors to sell books – which is what it’s all about, of course – there’s a “viral marketing” effect, similar to creating an effective book trailer (except it’s an interactive book trailer that totally engages the person watching it). The room URL can be shared, and we make it easy to tweet a room photo.

The rooms themselves can also be displayed on an author’s own website (it’s lovely and easy to do this, just like embedding a YouTube video), so they can add a touch of 3D to their own site. 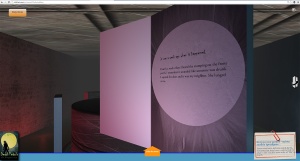 Virtual Book Tours are another way to spread the word about both your books and your 3D room. A “hosting author” could add another author’s book onto a guest shelf in their room, for the duration of the book tour. This also makes both the book and the room more discoverable – they’ll both show up on Google, for example; and on the book details page, the room will show up because it currently has that book in it.

What are some of your thoughts on the state of book discoverability, and are you incorporating these thoughts into Inkflash?

I guess that Amazon already has book searching all sewn up, so we’re not even attempting to compete with that. If someone’s looking for a specific book, obviously they’ll go straight to Amazon. But that isn’t what Inkflash is about anyway (luckily for us!). Instead, as you’ve noted, we’re more about book discovery. So you might go to Inkflash with an idea that you want to read a historical crime novel, or find a new space opera series, etc. We group the rooms into “neighbourhoods” of related genres; so you could spend an engaging hour exploring the SF neighbourhood or the historical fiction neighbourhood, exploring the authors’ literary worlds in 3D as you go.

We’re also finding that an author’s established readers will spend time in their Inkflash room – and crucially, keep returning to it – as it’s a new way to further explore a book’s setting and characters after they’ve finished reading (or while they’re waiting for the next one in the series).

Are there any plans for Inkflash to be compatible with either the Oculus or the more recently demonstrated Holo-Lens by Microsoft or are you taking a different route?

Oculus – definitely. As everything on Inkflash is browser-based, we’re also keeping a close eye on the VR builds being

developed for both Firefox and Chrome. These are definitely exciting times for VR. We have a working prototype already, and are really just waiting for a good moment to spend time polishing it up for release. Exploring these book rooms in “true” stereoscopic 3D is just startling. If you happen to see us at a trade show or in the pub, ask for a demo!

Holo-Lens – it’s an exciting technology (loved the Minecraft demo!), though we don’t have immediate plans for an Augmented Reality version of Inkflash. That’s not to say we won’t do it sometime though. Perhaps we need Waterstones (or B&N) to ask us to do an in-store AR version of Inkflash, that projects 3D book trailers next to the books themselves 🙂

In having a play with the website myself recently, I have to admit I am pretty impressed! and I can see this being very freeing particularly to those who cant get out to a real bookstore, have you considered working with a disabled charity such as “Special effect” which use special hardware and software to allow people with disabilities to play video games, but instead adapting this to allow them to enter the magical world of literature?

I’d love to do something like that (meaning, of course, that we’re currently not – but really should be). The potential for something like that is huge; and there are always somewhat unexpected ways to open things up for people with disabilities. For example, the creator of New Worlds Comics (who happen to also have an Inkflash room!  http://inkflash.com/NewWorldsComics ) has also set up Comics Empower – which creates audio comics for the blind. At first I thought “audiobook”, but the concept is actually quite different and innovative. The descriptions are notably present tense, active-voice, and effectively bring each comic panel to life.

And Finally, what can we expect to see from Inkflash in the future?

I might have to end with an annoying “wait and see”, but we do have a lot of new features in the works – and new ideas popping up all the time. As usual, the challenge is just keeping these developments under control, and releasing them one by one rather than going crazy like kids let loose in a sweetshop (which is pretty much how we are at times).

If you wish to find out more about Matt , or Inkflash you can follow him on Twitter, and have a look at His Companies and Inkflash’s Official Website, all of which are listed below.

Until next time, read more books..